The Truth about Slope 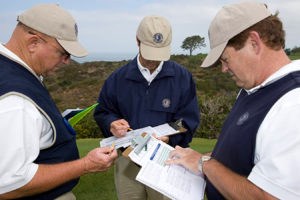 When the USGA instituted Slope a few years back, many golfers probably thought the USGA was switching to downhill skiing. In truth, the introduction of this new dimension to the USGA Handicap System has enabled players to receive more strokes on a difficult course and fewer strokes on an easier course. Now Uncle Snoopy and Woodstock can enjoy a fair game no matter what course they decide to play.

The USGA created Slope because players who developed handicaps playing on easy courses encountered problems in competing against players who formulated handicaps playing on difficult courses. Before Slope, golfers played with the same handicap on any course. Who would you rather have had as a partner: a player who earned his handicap playing the U.S. Open tees at Pebble Beach or the middle tees at Open Flats? Not a difficult question. Now, with Slope, two players with USGA Handicap Indexes of 18.0 can compete equitably no matter where they originally developed their Indexes.

For the past decade, over 5,000 volunteer men and women from state and regional golf associations have been trained by the USGA to rate golf courses. They work in teams of three or four-men usually rate sets of tees played by men and women normally review sets of tees played by women. Although length of a course is still important, ten other factors come into focus with Slope. You’re already familiar with a lot of them: width of fairways; height and difficulty of the rough; number and placement of bunkers, water hazards, and trees; and speed and contouring of greens.

All this information is considered. Each course is then rated based upon the scores a scratch golfer and bogey golfer are expected to shoot from a certain set of tees. When these scores are charted on a graph (see illustration), the line showing the difference in their scores forms a slope. Now you know where the term comes from.

The Slope of a more difficult course-the gap between the score of a scratch player and a bogey golfer-is steeper than an easier course, producing a higher Slope. A Slope of 113 signifies a course of average difficulty; 155 is the highest possible Slope, while 55 is the lowest. Whatever the Slope, it simply means that players receive more strokes on a more difficult course and fewer strokes on an easier course. Plus weaker players receive more strokes than stronger players as course difficulty increases because the gap between their scores increases.

Knowing the Slope of a course becomes important in order to post your score correctly. After all, your USGA Handicap Index can’t be accurate if you don’t post your scores properly and promptly. So be sure you know the Slope of the course you’re playing.

You can determine your own Course Handicap for that day by following this simple USGA formula: Multiply your USGA Handicap Index by the Slope of the course from the tees you’ll play. Divide this result by 113 and round off to the nearest whole number (decimals of .5 and higher are rounded up). Now you’re all set to tee it up.

The truth about Slope is that it allows players to move from one course to another and still enjoy a fair match, regardless of which course a player’s Handicap Index was originally developed on.