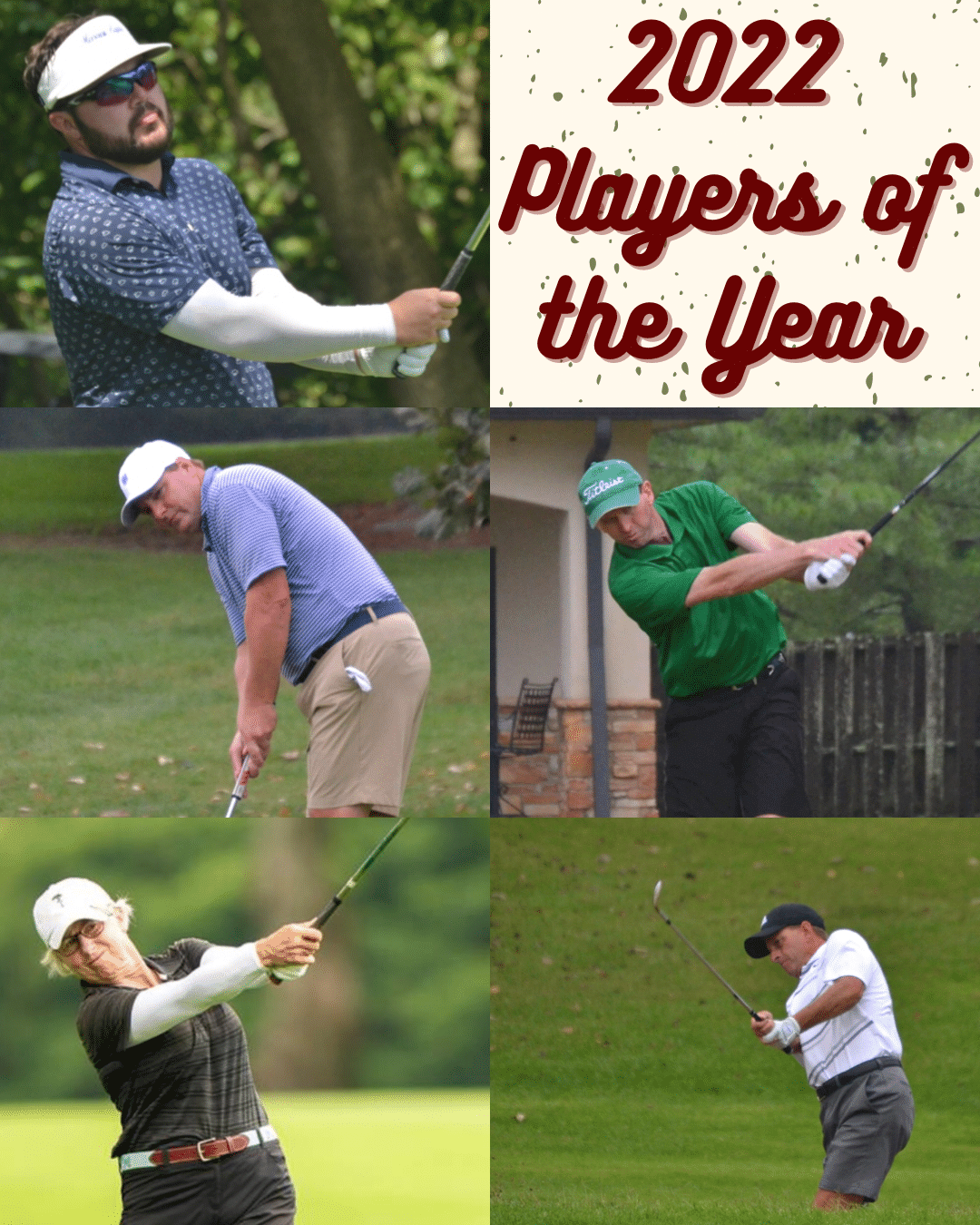 The 2022 Season has come to an end. With the passing of each season means the crowning of new Players of the Year. Working hard to earn the titles, Curtis Brokenbrow, Brian Lovett, Ellen Port, Bryan Warren, and Tom Portner, all proved why they should be on the top.

In the Men’s Player of the Year rankings, Chad Niezing took a strong early lead by pulling in 700 points through winning the Missouri Amateur. He also won the Metropolitan Four-Ball with his partner Chris Dale. His worst finish of the season was Tied for 13th, with all other finishes being 4th or better. Niezing sat at the top for most of the season and finished with 1491 points. A few other players decided they could not sit back and let Niezing run away with it. Tony Gumper hit a hot streak towards the second half of the season, making a run for the top. Early in the season, Gumper won the East Side Amateur, giving himself a strong start in the rankings. Throughout the season, he earned points to keep himself just within reach. Gumper won the Normandie Amateur to push up the rankings once more in August to sit in 3rd. He signed up for the Southern Illinois Amateur and was looking at a potential overtaking of Chad Niezing and Curtis Brokenbrow, but Brokenbrow was not going to go down without a fight. Curtis played in ten points earning events throughout the season. In Metropolitan championships, he never finished worse than Tied for 6th. Brokenbrow steadily racked up points and was in the mix all season. He was the second place finisher on the Amateur leaderboard in the Metropolitan Open, finished Tied for 2nd in the Metropolitan Four-Ball, won the City Championship, and was a semi-finalist in the Old Warson Cup. Gumper was only a few points away from overtaking Brokenbrow before the Southern Illinois Amateur. So, knowing he could not let Gumper earn points without getting some himself, they were both on the roster for one final championship. Gumper won the Southern Illinois Amateur, but Brokenbrow put up a strong second round to finish in solo second. With both players earning points, Brokenbrow held off Gumper and became the 2022 Player of the Year with 1644.17 points.


The Senior Division had a few changes early in the season, but Buddy Allen quickly took a hold of the reins. Allen was grinding it out all season, winning the Senior Division Old Warson Cup and the Senior Division Metropolitan Four-Ball with partner Brian Lovett. Buddy held the lead for most of the season, cushioning his points by qualifying for the U.S. Senior Amateur as a medalist and subsequently making it to the match play portion of the championship. His four-ball partner, Brian Lovett, decided that he was not going to let the season nonchalantly go by. The Senior Division Metropolitan Four-Ball win was just the start to Lovett’s incredible season. A late season streak pushed him to the top. Playing in just three more Metropolitan Championships, Lovett went on to win all of them - Normandie Amateur, Southern Illinois Amateur, and Metropolitan Senior Amateur. Going into the Southern Illinois Amateur, Allen still led the rankings, but Lovett’s win was all it took for him to get within striking distance. Lovett proceeded to go on and win the Senior Amateur. Going 4/4 and using the Senior Amateur to overtake Allen, Brian Lovett is the 2022 Senior Player of the Year with 1625 points.

Once again, Ellen Port has taken over the Women’s Player of the Year leaderboard. She won the Missouri Women’s Mid-Amateur and placed 7th in the Missouri Women’s Amateur. Port’s season did not stop there, as she competed in four USGA Championships. Through her previous USGA successes, she was exempt into the U.S. Women’s Amateur, where she missed the cut. Her next three USGA appearances were more successful. In both the U.S. Senior Women’s Amateur and the U.S. Women’s Mid-Amateur, Port made it to the Round of 32 before being knocked out. Port also put her clubs on the course in the U.S. Senior Women’s Open, where she finished Tied for 29th. Ellen Port is the 2022 Women’s Player of the Year with 2520 points.

In Southern Illinois, Bryan Warren takes the prize with 1500 points. Warren played in six events that earned him points this season. He placed 3rd in the SIGA Championship, and 2nd in the McLeansboro Amateur. Warren also qualified for the Illinois State Amateur. These accomplishments, along with the three other events, Bryan Warren is the 2022 SIGA Player of the Year. Meanwhile, Tom Portner made a splash in the SIGA Senior rankings. Portner placed third in the senior divisions of the SIGA Championship and the Southern Illinois Amateur. He too qualified for the Illinois State Amateur. Portner started his season with a win at the Senior Benton Golf Cup. Over the season, he earned 1550 points meaning Tom Portner is the 2022 SIGA Senior Player of the Year.

On Wednesday November 30, we will be honoring the Players of the Year along with the Host Clubs of the Year awards. We are also using this night to celebrate the 30th Year Anniversary of the Metropolitan Amateur Golf Association. Please join us from 6:00-8:00pm to celebrate all of the accomplishments of this year. To register your attendance and pay, please click here . We hope to see you there, and congratulations to all of the Players of the Year!