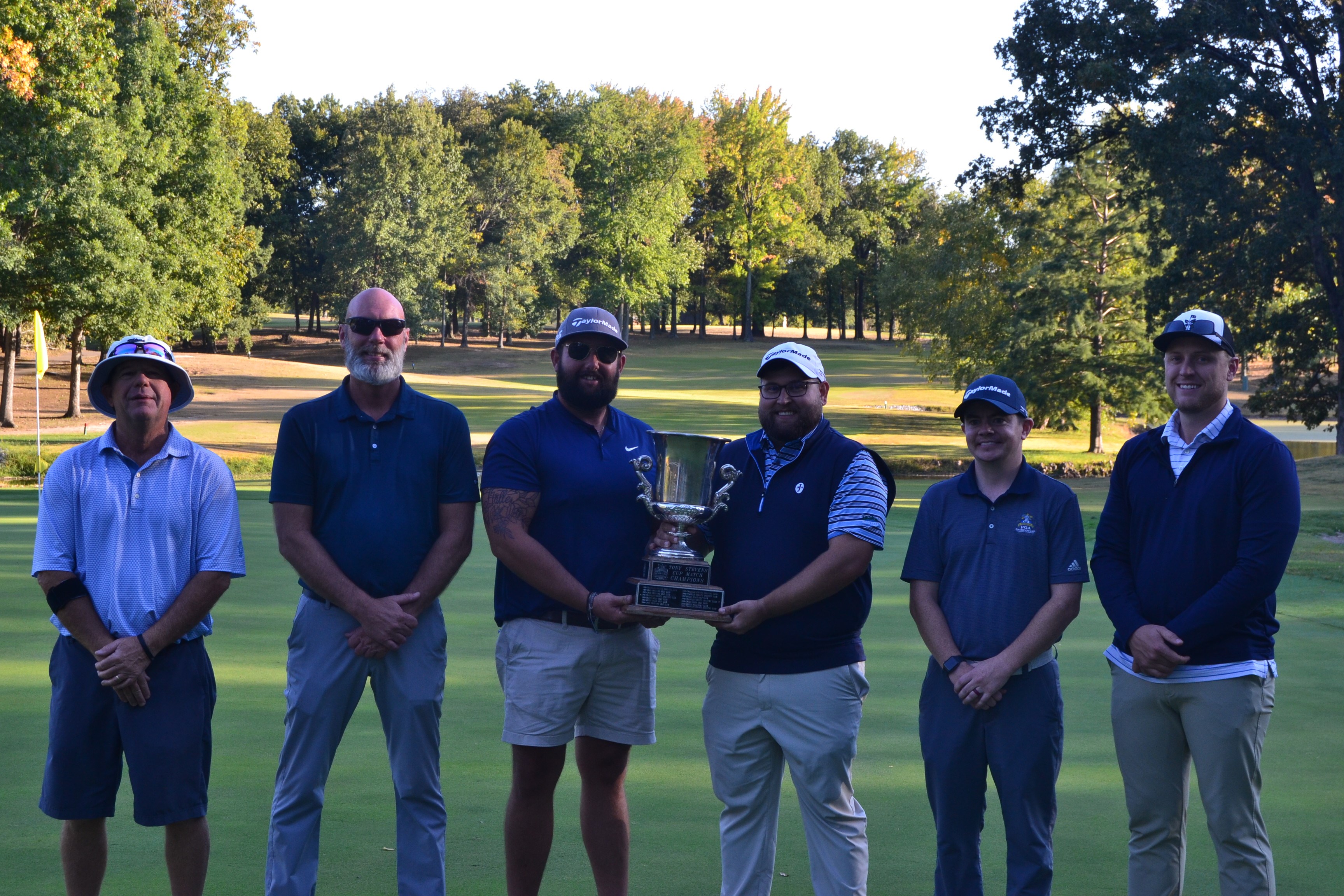 Whittingham, IL - The Tony Stevens Cup is a long standing tradition of the Southern Illinois Golf Association. It is a 27 hole, 6-man club team championship. Played all in one day, each team plays 9-holes of four-ball, 9-holes of a modified Chapman, and 9-holes of foursomes. The team score consists of the two lowest scores from the team for each of the 9-holes rounds with the lowest team score winning the championship. Ten teams took to the course this year to battle for the trophy at Rend Lake Golf Course in Whittingham, IL.

The four-ball stroke play round started at 9:00am. McLeansboro Golf Club Team 1 put up a strong showing with a team score of six-under (-6) par. Within the team, Jerrod Prince and Jeff Gray came in with a four-under (-4) par. Bryan Warren and Shayne Downen shot two-under (-2) par to boost the team to six-under, while Chris Hopfinger and Landon Vaughan just barely missed out on being included in the team total with a one-under (-1) par. Rend Lake Golf Course was three shots back, sitting in second place at three-under (-3) par after the first round. Kevin Tate and Andrew Mitchell put up a score of two-under (-2) par, and both the sides of Adam Johnston and Bryce Doughty, as well as, Anthony Heinrich and Scott Bates came in with scores of one-under (-1). Both Green Hills Golf Club and Red Hawk Golf Club sat tied for third at one-under (-1) par.

At 12:00pm, the teams went back out for round two using the modified Chapman. This format requires each player to play their own ball off the tee, followed by playing your partner’s ball for the second shot, and then selecting one ball to complete the hole using alternating shots. Rend Lake Golf Course came out swinging in this round, putting up a total of four-under (-4) par. Kevin Tate and Andrew Mitchell really got the ball rolling with a score of four-under (-4) par. Both of the other two partnerships came in with even-par (E). Green Hills Golf Club were fighting to move up the board with a round score of two-under (-2) par. Tom Portner and Brandon Bullard put up the two-under (-2) to combine with Matt Heffley and Jonathan Stowers' score of even-par (E). McLeansboro Golf Club Team 1 was only able to card a one-under (-1) par to bring their championship total to seven-under (-7) par. After Round 2, the team championship leaderboard showed McLeansboro GC 1 and Rend Lake GCtied at seven-under (-7) par with Green Hills GC following at three-under (-3) par.

Promptly following Round 2, the Final Round with a foursomes alternate-shot format began at 3:00pm. Rend Lake topped the round leaderboard again with a score of even-par (E). Adam Johnston and Bryce Doughty fired a one-under (-1) par, while their teammates Tate and Mitchell evened out the total with a score of one-over (+1) par. This final round proved a challenge as all other teams came in over par. McLeansboro Golf Club Team 1 fell in Round 3, bringing their championship total to two-under (-2) par. Green Hills was also unable to push up the leaderboard with a final round that brought their total score down to even-par (E). Rend Lake Golf Course’s final round kept them at seven-under (-7) par for the Championship, which would claim them the victory on their home course.