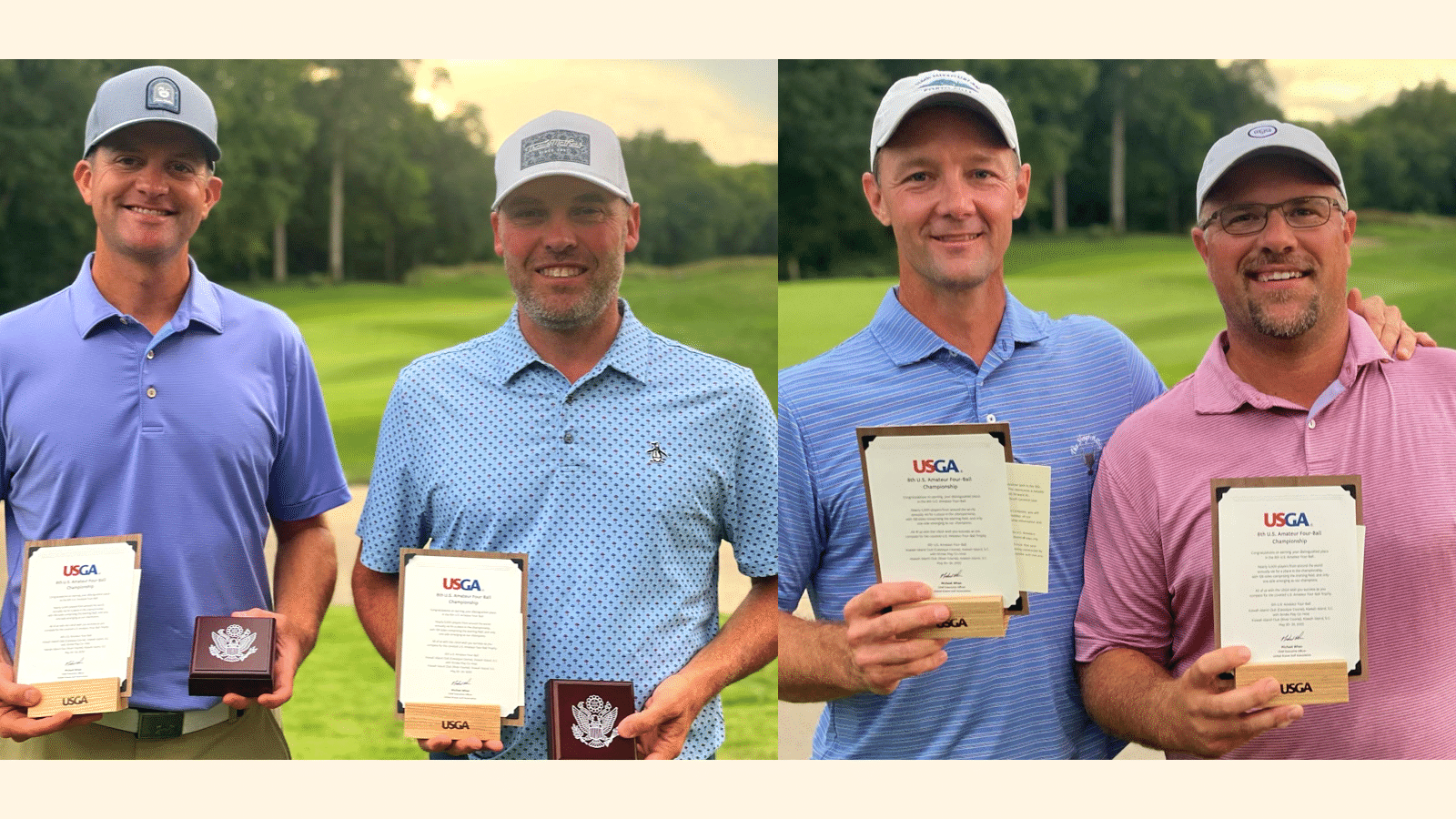 O'Fallon, MO - It was an eventful day at WingHaven Country Club in O’Fallon, MO for the 2023 U.S. Amateur and Women’s Amateur Four-Ball Qualifiers. The sun was shining throughout the day with a few clouds in the sky. A light breeze continued throughout the day as the temperature reached 91°F. In the later hours, more cloud cover appeared as rain was closing in from the west. Through the course of the round, scores were updated after holes 5, 9, and 15 before the final scores were entered upon conclusion. The course played as a par 72. There was one qualifying spot available for the women, two qualifying spots available for the men, and two alternate positions in both.

The women started the day off at 7:00am. It was a tight race from beginning to end. Taking the early lead, Peyton Cusick and Nicole Johnson, of Edwardsville, IL and Ballwin, MO, were 2-under par through five holes with 3 teams tied one shot behind. Making the turn at 2-under par, the team of Paige Giovenco and Claire Swathwood, of Carmel and Sellersburg, IN, and the team of Dawn Woodard and Meghan Stasi, of Greer, SC and Oakland Park, FL, topped the leaderboard with two teams in tow at 1-under par. Continuing to fight for the one qualifying spot, Cusick and Johnson as well as Giovenco and Swathwood came into the final three holes at 3-under par. The other three teams were following close behind at 2-under par. The first four groups to come in finished their rounds at 2-under par (70), leaving it up to the final pairing to determine if a full field playoff would be needed. Woodard and Stasi came into the clubhouse at 4-under par (68), capturing the qualifying spot for the 2023 U.S. Women’s Amateur Four-Ball Championship at The Home Course.

The ladies kept the suspense going as there was a four team playoff for the two alternate spots. Going off on Hole 1, the first two teams finished the hole with a par. When the second two teams made their way down, the side of Emree Cameron and Audrey Rischer, of Nevada and Columbia, MO, holed out from the fairway for eagle, claiming the first alternate position. This was quite the run for Cameron and Rischer, as they were over par and last on the leaderboard through nine holes, but they fought back to claim that spot. The other three teams moved on to the second playoff hole, Hole 2, where Nicole Johnson and Peyton Cusick fell short with a bogey. The final two teams moved on to a third playoff hole, Hole 3, where Kinslea Jones and Emerie Schartz, of Wichita, KS, beat Swathwood and Giovenco with a par to get the second alternate shot.

While the drama unfolded for the women’s qualifier, the men were heating up. Steven Hyten and Matthew Lewis, of Edwardsville, IL, started off hot, going 5-under through five holes. With some teams through nine holes and others through five, Hyten and Lewis still needed to broaden their lead, as seven other teams were within three-strokes. As more teams were rounding the course, many were moving up and down the leaderboard. Around 12:35pm, Ryan Eckelkamp and Tony Gumper, of Washington and St. Charles, MO, had reached 6-under par through fifteen, while Hyten and Lewis had fallen to 4-under par through nine. Blake Driskell and Todd Obergoenner, of Jackson and Cape Girardeau, MO, were following close behind the lead at 5-under par. Adam Tomicich and Zachary Holland, of St. Peters and Lake St. Louis, MO, tried to remain steady throughout their round shooting 3-under par on the front and 5-under par on the back to come in at 8-under par. Keeping it consistent throughout their round, the team of Brad Nurski and Hunter Parrish, of St. Joseph and Columbia, MO, and the team of Eckelkamp and Gumper came in with a 4-under par on the front as well as the back to also finish at 8-under par. Hyten and Lewis pushed back from their bogey on hole eight to finish with a strong back nine of 5-under par, bringing them to a total of 9-under par. This put them on top of the leaderboard and made them the Qualifying Medalists.

With three tied at 8-under par, and only two qualifying spots available, a playoff was needed to decide the second qualifier and the two alternates. The three teams made their way down the first playoff hole, Hole 18, where the side of Eckelkamp and Gumper made a birdie putt to put the pressure on the competition, but Nurski and Parrish responded by making their crucial birdie putt to stay alive. Holland and Tomicich made par on this hole, knocking them out of contention and into the second alternate spot. On the second playoff hole, Hole 10, Gumper chipped one in close to save par leaving the fate in the hands of their competitors. Nurski and Parrish were unable to capitalize on their birdie chance, sending the playoff to a third hole. The teams made their way down Hole 18 for the third time that day. Gumper hit his approach shot from the fairway to stick it within inches of the pin. A tap-in for birdie put Eckelkamp and Gumper up on their competition. Unable to make birdie, Nurski and Parrish became the first alternates, and sent Eckelkamp and Gumper to Kiawah Island as the second Qualifiers.

Meghan Stasi and Dawn Woodard will compete next year on May 13-17, 2023 at The Home Course in DuPont, Washington for the 8th U.S. Women’s Amateur Four-Ball Championship. The team of Steven Hyten and Matthew Lewis, as well as the team of Ryan Eckelkamp and Tony Gumper, will head to Kiawah Island Club in South Carolina for the 8th U.S. Four-Ball Championship on May 20-24, 2023.