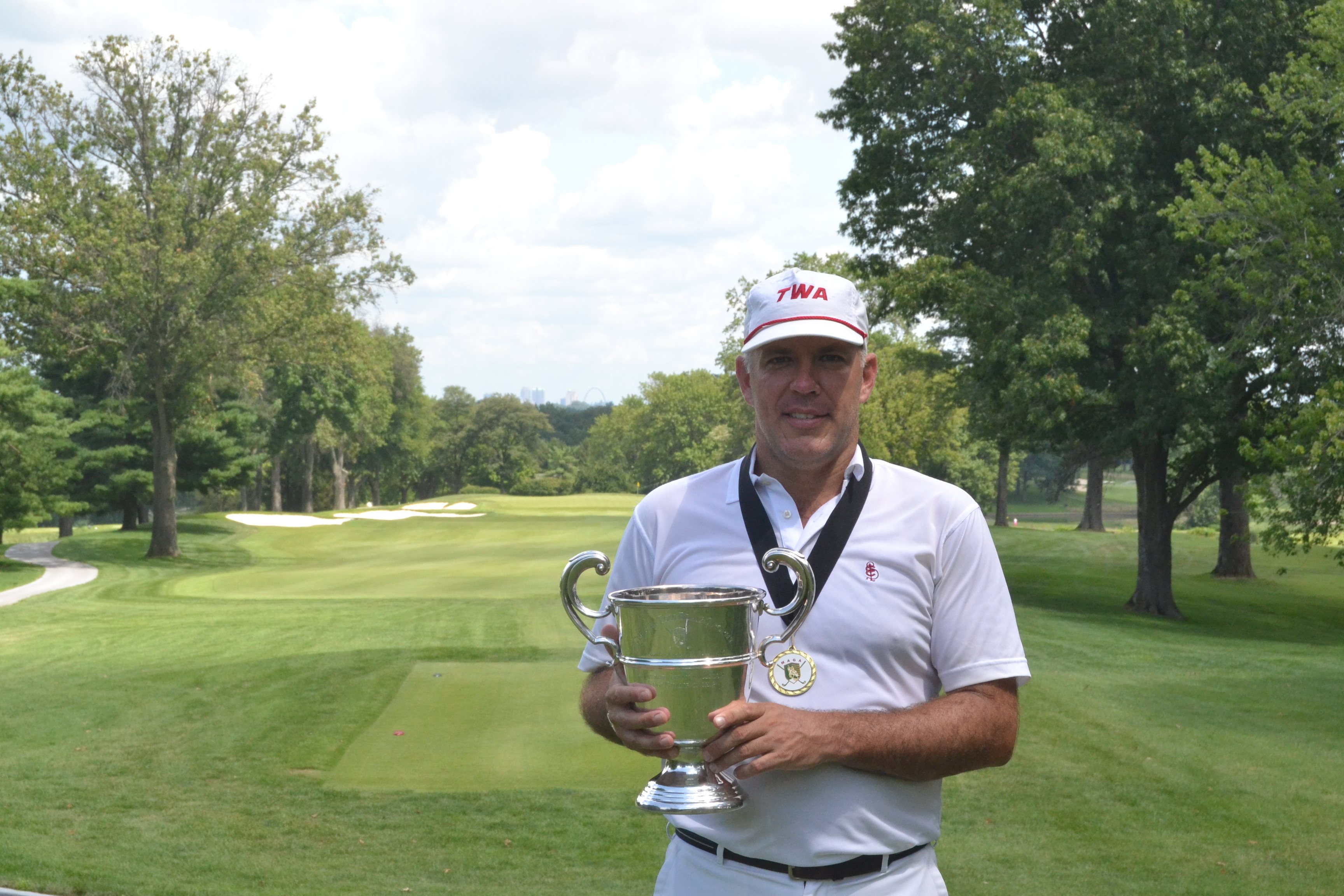 Ladue, MO – Drew Pranger won his third Metropolitan Amateur Championship Sunday shooting a 70, 69 and then 68 to finish at -6 during the Championship. Pranger is the first player ever to win three championships.

The heat continued into the 3rd Round of the Championship with players battling high temperatures and humidity throughout their rounds Sunday. The final round was action-packed with a tight and competitive field from the 1st all the way to the 18th tees.

At one point in the final round the top five positions were only separated by two strokes, with more than six holes to play. Tyler Linenbroker had led the Championship through the 1st two rounds and while he was looking to maintain his lead Sunday, he was unable to hold on and fell into a tie for 3rd with Shawn Jasper and Justin Bryant.

Ryan Sullivan made a huge push in the final round climbing from 6th all the way up to first, posting four birdies on the front nine alone. Unfortunately, he was unable to stay hot on the back nine, where he bogeyed the 15th and 16th holes to fall to 2nd.

Justin Bryant was also able to make a late push for the lead posting three birdies on his front nine to jump into a tie for 1st place. Bogeys on the back nine would also oust him from the top of the leaderboard where he would finish in a tie for 3rd with Shawn Jasper and Tyler Linenbroker.

Over the 54-hole Championship, Pranger shot an impressive 11 birdies compared to only 5 bogeys on the way to his victory. Pranger was also the only player to finish under par all three rounds of the Championship.

“We’ve had so many good amateur players in this town for so long that no one else has won this three times” said Pranger when asked how he felt about his record third Metropolitan Amateur Championship, “it’s pretty gratifying I’m not gonna lie.”

Pranger felt that it was easier to close this Championship out compared to his previous wins because of the lead he had managed to build going into the last few holes even though he was not aware he had a four-stroke lead until his caddy, Mike Wellington, told him on the 18th Tee Box.

Pranger also commented on the difficulty of the course at Old Warson saying “this place is challenging, so shooting the scores I shot and playing and winning by three, it’s just gratifying for my own mindset.”

While he did not look at the leaderboard throughout his round, he did say that “when I birdied 13, I got to -5… and -5 is pretty good” when asked if he started to realize he was going to win during his round.

A number of players commented on the difficulty of the course at Old Warson as well as the great condition that the course was in, a testament to the hard work put in by the grounds crew at Old Warson to get the course back in playing shape following the flooding Thursday morning.

Tom O’Toole commended the club for their commitment to the Championship saying, “it was great to get that support from the staff and certainly from the membership as well.” He said Thursday morning when the course was covered in water the staff at Old Warson told him “we’re committed to the championship, we’re gonna play 54 holes.”

In his remarks following the trophy presentation Pranger thanked the staff and members at Old Warson for making the tournament possible along with the staff at MAGA and said “It feels really great to be the first three-time champ.”